Hello everybody. Today I want to show you a very fun tutorial since it is about making two games in one recycling tin cans and painting them.

With empty tin cans we can make two super games fun for children. A tower game to knock down with a ball and another with numbers to score points for hitting that can.

This tutorial can be do also with the children and they will love making their own toys.

The first thing I did with the tin cans was wash and dry them well. Then I took out the paper that covers them, if it is attached we can use hot water or some solvent for the area where the glue is.

When I had the cans clean and dry, I gave them a soft sandpaper so that the primer covers the canning cans better. And then I gave them a coat of white paint or primer and let them dry very well.

To continue recycling the cans, I chose several funny faces that I looked for on the Internet and drew them on paper as a role model.

Then I was painting the other cans of preserves one by one with the different colors that I wanted to use for the games and I let them dry very well. I used 5 colors, blue, yellow, green, red and pink and I repeated them in some cans of preserves. But you can use all the colors you want.

When the second coat of paint was dry I started to draw the faces on the canning cans. With a permanent black marker I was drawing the faces one by one on the cans. And on the opposite side I put a number on each can of preserves.

To better preserve the painting and the drawing we can give them a coat of transparent fixing varnish and thus they will last longer.

With these recycled tin cans we can make two games, the first the typical game of building a tower with the cans and knocking them down with a ball, the one who knocks down the greatest number of cans will be the winner. And the second is to put the cans on the floor or on a table and with small balls or ping-pong balls throw them to hit the cans and then add the points of each can that we have hit the ball. 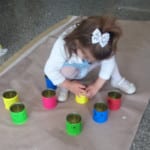 We can also take advantage of colors and numbers to teach them to the little ones. In addition to these games we can give many other uses to recycled cans. Children are very attracted to it and have a lot of fun. It is also a good entertainment for parties and birthdays.

I hope you liked this tutorial and that you are encouraged to do it at home.

! Leave me your comments!

The content of the article adheres to our principles of editorial ethics. To report an error click here!.

Full path to article: Crafts On » Crafts » Crafts for kids » Recycled tin cans to play with

It may interest you

News in your email

Receive the new crafts and tips in your email.